These charts are both of ABX. On the left as measured in Canadian dollars and on the right the same thing except in US dollars. The consequences of the differences between the two can have a substantial impact on the count in EW terms that one would come up with. Things like overlap, where the top is, staying in the channel are all different depending on the currency. This is a philosophical issue that I am sure will never be answered, primarily because EW is simple discarded out of hand by some or followed with the fanaticism of myopic cultists by others. I don’t have the answer but in this case I would prefer using the US$ chart as gold is measured in US$, ABX’s operations are in the States and they report in dollars. Put in other words, the chart on the right is free from currency distortions. So is the detailed one below; 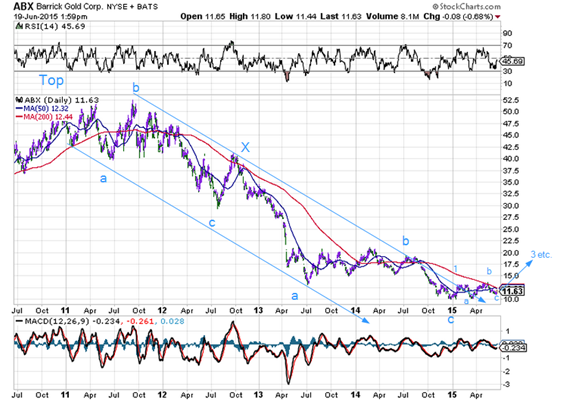 Our best guess here is that the entire correction took the form of a double zig-zag, i.e. an a-b-c X a-b-c. It is fairly symmetric and already well outside the channel. From the lows of about US$10 we appear to have either a wave 1 followed by an a-b-c wave 2, or a series of 1-2. In both cases the stock should go up. The XAU, HUI and CEF fund all have triangles that they should return to. None has done so so far.