We are going to use JPM as a proxy for the Canadian banks in the next blog. For those that do not care too much about EW niceties we suggest you skip this blog and just remember the conclusion, that is that JPM stock is going to go down to below $20.

In EW terms there are two competing scenarios. Without getting into too much detail they are a. The top was in in 2000 (remember Y2K and the tech crash?), since then we have done an A, a – triangle b – c for B and are now poised to go into C ; this is shown in blue. The alternative b. is that the 2000 top was just the top of wave 3 and that from there we did a (bigger) triangle for wave 4 and then wave 5. This is shown in red. It is possible that that 5th wave is not done yet, but looking at the triangle’s mouth, the apex, certain equalities and the main channel lines we would give that a very low probability.

Whether this is going to be a C wave (5-waves) or a zig-zag correction (three waves) does not matter with respect to the target which is below $20. JPM is not the biggest bank in the US – that is Wells Fargo, WFC- but this bank is most closely associated with the NY city banks and the hoopla surrounding the bail-out and  the Fed.’s easing. As such it should serve well as a model for other banks, even Canadian banks. That is next.

Goldman Sachs, by the way, is squarely in the B-wave camp; 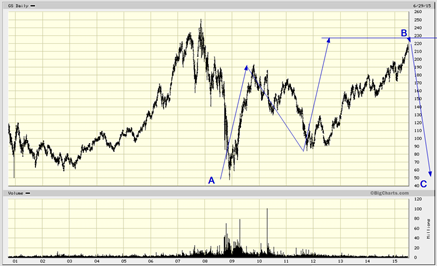