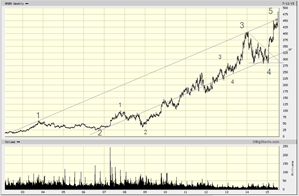 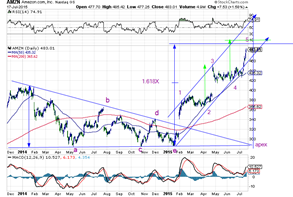 For full disclosure see previous blog of some three years ago which was dead wrong. This time we have a few more things to hang our hat on. First and foremost, as always, it would appear that a five wave sequence is coming to an end. The exact subdivisions are debatable but not that sequence and the channel. Shorter term we have a very nice triangle that, under the circumstances, almost has to be a fourth wave. The “thrust” out of the triangle is much bigger than the triangle’s mouth measures and will probable develop as a 1.618x multiple thereof. The fifth wave itself could be coming to an end soon if the count shown is correct. Wave 3 is shorter than wave 1 so wave 5 has to be shorter than wave 3. Alternatively we are about to complete 3 and still need 4 and 5. Given the trend lines, the position right above the apex and the fact that we will soon be at $500 we think it is a sell at that level or just below.

By the way, this stock is up more than $200 over the last 6 to 7 months and is now approaching JP Morgan in terms of market cap. Annualised this increase approximates 150% which is  more than the Shanghai index did. Everything is relative.

If you want to stay in this space, BABA may be a suitable alternative; 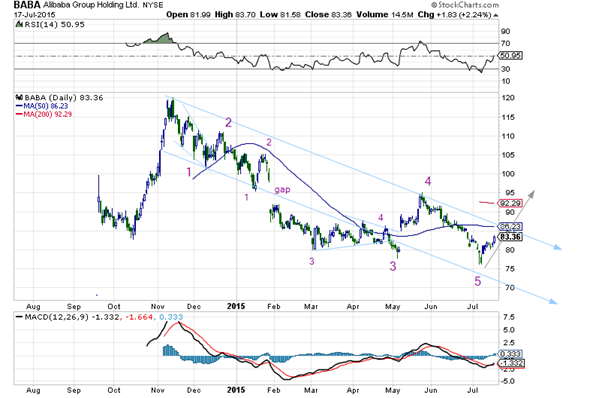 It appears to have already completed 5 waves down and could therefore climb back to at least $95. Yahoo is looking to unload the shares it owns by creating a separate company. If they get the OK to do that as a tax-free roll-over the $32 bln. in stock should be absorbed relatively easily. The IPO price, incidentally, was $68.