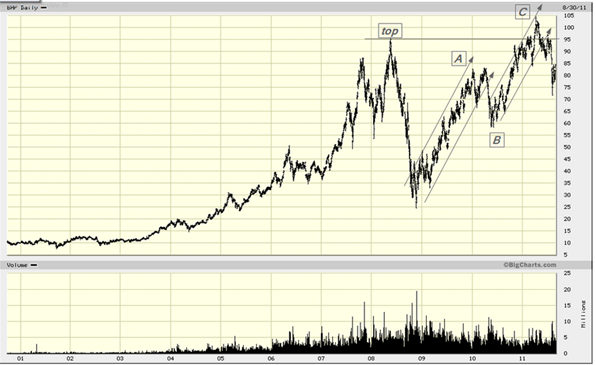 This is an old blog from August 8, 2011, nearly four years ago. Today we are not at all sure that the B-wave as indicated in the chart is actually a B wave and not a 5th wave. Fortunately, for the immediate direction of the stock it does not make a lot of difference, except that if there was a B then we are now in a C that must subdivide as a 5-wave structure. If this was a 5th wave all we need is a big correction that can take a number of different shapes. In BOTH cases the ultimate target is at the 4th wave of previous degree at about $25 or below. We have redone this chart as per below, showing the top in 2011;

The nice thing about using a longer term chart is that things that appear quite improbable with shorter term charts, al of a sudden become quite plausible. Here we have drawn a band that has contained the stock from inception when it was an Anglo-Dutch mining conglomerate. Here again you can see that the stock only jumped the tracks in 2004 and increased 5-fold in just 4 or 7 years, a relatively short period of time in the context of the history of this company. The lift-off seems to coincide, with about a three year lag, with Fed. easing around 2000 as a result of Y2K and the tech bubble crash.

If the real top was indeed the second top, we could have a zig-zag correction which would take the form of two down legs with some sort of intermission (an a-b-c or triangle) in the middle. That is shown in purple using the 1-2-3 annotation just in case this develops into a 5-wave affair. That should bring us to the 4th of previous degree. It will not take all that much to push the stock back into the band. Another write-off, this time for a paltry 2 bln has already been announced making lower stock prices all the more plausible.