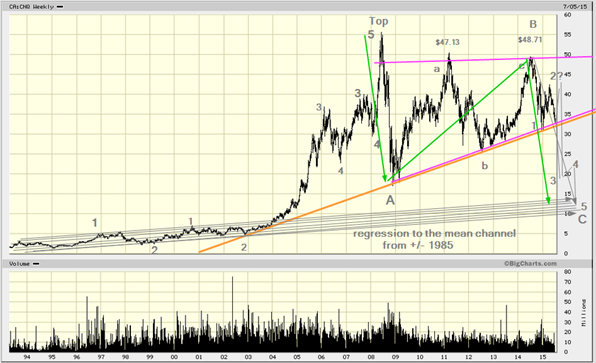 Using CNQ we would like to summarize a few of the points in the previous two blogs.

1. Do not blindly trust charts. Unless you can get your hands on very detailed, long-term, tick charts there is always a trade-off between the length and the quality of the resolution. In this case point a is well below point c. Moreover the high of point a, shown to be above $50, is in reality only at $47.13. This is not just lost information but false information.

2. There cannot be a triangle here. Because of the above the top boundary line (in purple) has an upward slope. So does the bottom one. In true triangles the two boundary lines MUST have opposite slopes, ergo this is not a triangle.

3. Your arm, from your shoulder to your finger tips, has 21 degrees of freedom, a stock only two and those are up or down. Even then they are limited by boundaries at least within the context of time. Here the beige line with numerous touch points represents such a boundary. Break it and you are in free fall.  Presently that point is just under $32.

4.There is this generally accepted principle that things will return to normal after exciting times. That is what is meant by regressing to the mean in statistics. Obviously you would need to know what is normal and what is not. That is relatively easy as it is inherently simple a matter of time. Here what is normal is represented by the grey channel which goes back to 1985 and much further before that. What is abnormal is what has happened since the stock broke out in and around 2004 to 2008, four years after which it is trying to get back in . Expect a return to the channel ultimately, often even all the way to the other side.

5. In EW terms what we have here is a large “flat”. This terminology is, for a change, straight-forward as that is what it means, flat or nearly so. The structure is typically a 3-3-5, the A is 3, the B is 3 and the C should develop as a 5. The flat is shown schematically in green. Not infrequently the A and C legs are vector equal and often enough all three are equal as is the case here, more or less.

6. This pattern is not exclusive to CNQ. It is universal and everywhere, most importantly in China as can be seen from my recent, June 26th, take on Shanghai and the more recent , July 10th, copy by EW International in their latest piece. This is the 6th time that they copy me, and I am flattered again. 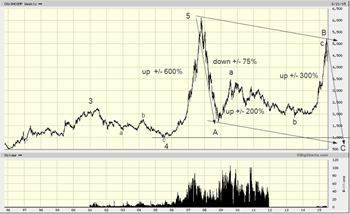 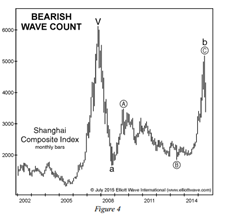 7. So in conclusion you should sell, not necessarily tomorrow but certainly on a stop if $32 is breached. This is what it might look like. 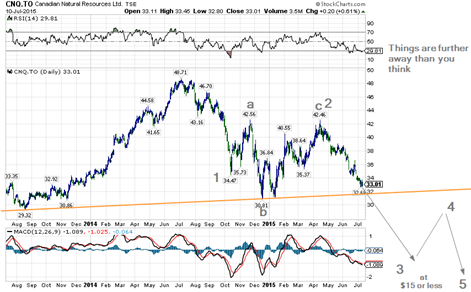