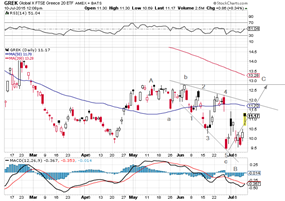 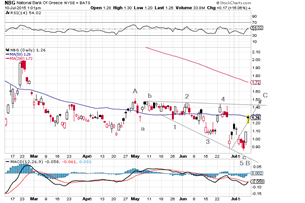 Just three days ago we showed the GREK ETF as a buy and mentioned that National Bank of Greece was in a similar position. Both sport a clear “expanding diagonal triangle”, a structure that very reliably promises a violent return to its starting point. The first was a buy at $10 and the second below $1. Both traded well below those levels on the 8th of July, the day after the recommendation. We would sell the GREK at $12.50 and the NBG at $1.45 and put the orders in in advance. We have no idea whether or not either or both of these stocks can go higher than those prices, very possible they can but, but we would be perfectly happy with 25% and 45% in about a week  and happy to leave it at that.

Things are moving along quite nicely on the Greek front. One of the main problems of course is the underground cash economy with a lot of bribes at all levels. Without these bribes or “fakelaki” -  as in souvlaki – as the small envelopes apparently are called, the whole economy grinds to a halt, but with them tax collection is impossible. This is not unique to Greece. Throughout the Middle East “bakshish” is rampant and it does make things different to integrate into the “core” values of the European community. But for the next week things look promising. Even Yellen is sticking to her timetable of one move this year.