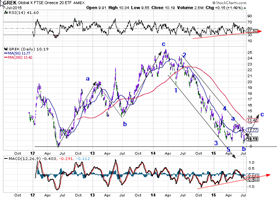 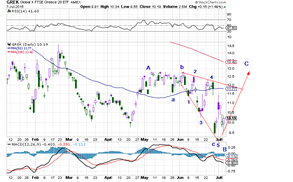 Earlier I predicted that the Athens index would not go down. So far that has been correct. Agreed that the markets close might have something to do with it but so what. Looking at what does trade it would seem that there is still some optimism . The National Bank of Greece, NBG as an ADR, that is NOT the central bank just like Bank of America is not, has gone down a little and may actually be a buy at $1 coming from $700, but we would prefer using this 20 stock ETF. How it is priced is a riddle  as presumable the underlying stocks are not trading, but that is a different matter all together. Notice that there is no new low (yet?), but we can already count 5 waves down. Also , in the more detailed chart, there is a rather clear “expanding diagonal triangle” which suggest a violent move back up to about $14 and a bit, roughly 40% from here.

By the way, did anyone notice that the results from the referendum were dead on the golden ratio of 61.8 to 38.2 for whatever that may mean.