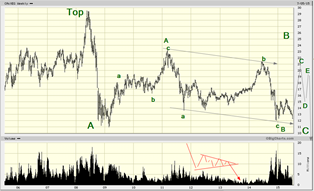 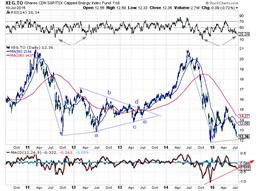 The way to analyse a stock, ETF, or whatever by way of EW, is best done by looking at the BIG picture first and then drilling down into the detail. In some situations that does not apply. For instance if a particular minute pattern stands out and sort of “anchors” the blue sky of the puzzle around it. When you do that with the XEG the immediate bull case becomes so much more credible.

This iShare ETF is managed by Blackrock, they do iThinking. When I iThink I often get into trouble. This ETF is capped, usually that means that each participating stock in the ETF is either equally weighted, or, at the very least, is given a weight that is less than its capitalization would warrant. Here are the first 10 out of 52 holdings according to the website; 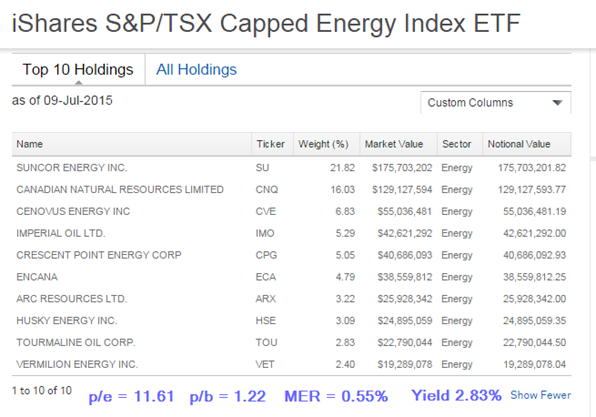 Maybe I did not drill down deep enough but if the top ten constitute 65+% of the total I am not sure how the capping is done. In any event the symmetry in the charts as measured over the past 4+ years is absolutely striking. It suggest the entire move, that is the two down legs plus the intervening up leg

are all part and parcel of one single move which appears to be complete. The implication could be that starting from the top we have a failed double zig-zag down. Alternatively we could be making a huge triangle (see red insert) and are now  in wave C of that formation. Both are positive for the near-term. Long-term the triangle is negative. SU, Suncor, the largest constituent in this ETF still looks awful ( see next and previous blogs).