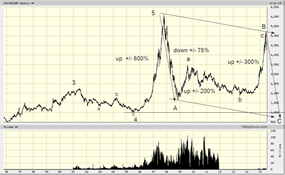 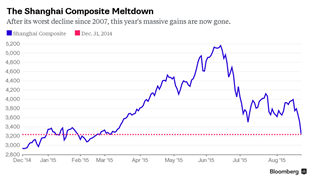 We use Bloomberg so that it includes today’s 8% slide.    We always expected that problems could emanate from China. It is after all the “new world” of today despite being one of the oldest countries on earth. Repeatedly we have expressed our amazement at what is going on there (see previous blogs). Colossal misallocation of capital is the fundamental cause plus, perhaps, a thoroughly misguided notion that the central government can do anything or correct what might be going wrong.

In our opinion at the heart of the problem, and this is true for all central bankers, lies an incorrect notion of what wealth really is. If a farmer plants and harvests his grain he ends up with a silo full of the stuff. This is physical, it is there and does not just evaporate. If, on the other hand, an investor buys stock which is then goosed up by central bank policies (300% in a year in this case), no wealth has been created un till the gains are harvested. Unlike with the grain, the process of harvesting destroys the wealth at more or less the same speed as it was supposedly created. In short nothing was ever accomplished other than the creation of a delusion. An individual can, of course, make a killing but collectively that is simple not possible, and China is nothing if not one big collective.

Interestingly, the human mind is extraordinarily biased to the upside. Nobody complains when this index rises 300 to 600% in one or two years. But when it goes the other way something has to be done to stop the bloodletting. Short of creating the same conditions in perpetuity into the future, that gave rise to the gains,  that is the same growth, the same interest, the same everything, it is not possible to keep the illusion going.

There is still a long way to go before this is over. Essentially we are looking for the 1000 level. At this rate we could be there early next year. Our best guess is that we are presently in the 3d wave of wave 3 of C in a large, multi-year flat. The target is usually the 4th wave of previous degree. Please also note that “overlap” has already occurred which pretty well eliminates any possibility of this being a 5th wave to much higher levels.