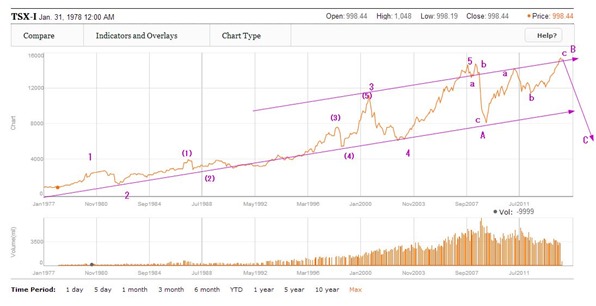 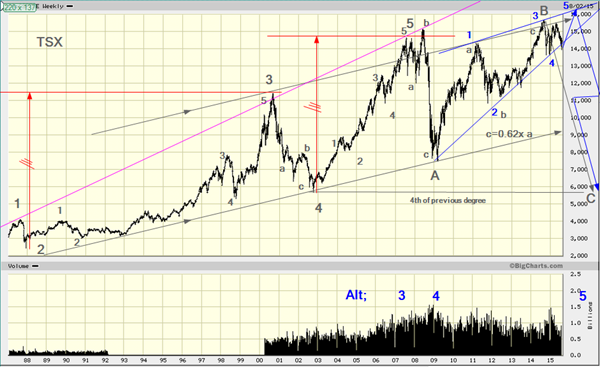 As you can see very little has changed apart from a full year going by. Timing is important but more so for short-term traders or option traders. All others are best served by anticipating what might happen rather than the exact moment that it might happen.

What you need to take from these charts is that probably, starting a year ago, the TSX has entered into a bear market. Normally that means a retracement to a wave 4 of previous degree, that is the one on the way up, and or a retracement of a Fibo. 62%. Both point towards a level of about 6000 or lower. These, by the way, are normal minimums. There is nothing sinister about these levels, its simple the way markets work.

When you use EW the most important thing to remember is that you should not think. For most people that is not a problem except when it comes to the investment business. There are so many preconceived notions that we pick up from talking heads on BNN or wherever that we cannot accept that they are wrong well after it is too late. They nearly always are, so just stop thinking!

There is a whole list of reasons why the above charts conform to EW expectations. Trend lines or channels are well defined, proportions are near perfect, alternation between waves occurs, and there even appears to be a 7 to 8 year cycle.

Down legs are done in about two years, wave A is an irregular wave and also lasts about two years despite it’s looks. If this is a guide the TSX might be in one of these “right-hand-translation” phenomenon when nothing happens for most of the allocated time and then, all of a sudden all hell breaks lose. A bottom at the end of 2016 is entirely possible.

So what can go wrong? The count or the labelling could be off as there might be a viable, bullish, alternative. The one that presents itself is pictured in blue. This is a “diagonal” or wedge. It has to be as there already is overlap so if we are still in a 5th wave it must be such a wedge. We are now in wave 4 which may be complete or not at all complete if it is going to trace out a triangle. In that event more time will be consumed. Either way the top would probable be in at around 16000 a year or more from now. We would give this alternate possibility a very low weight. Furthermore for the next few years the downside is 5 to 6 times larger than the upside. Odds that only a non thinking person could ignore.

Inverse ETF’s are the thing to buy here. HXD is one but there are others.