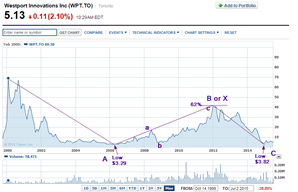 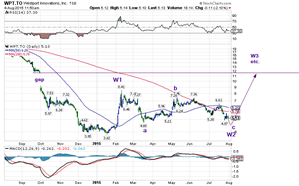 In the big picture this stock appears to have completed a large A-B(orX)-C down. Appears is the operative word here. No new low was ever made, it fell short by $0.53, but that does not necessarily disqualify the count. From that low it doubles very rapidly in what we assume is a first wave up. It then retraces most of that, as it should, in a second wave. Next is wave 3, or at worst c, that should try to close the gap. A drop now would negate this count but leave open the simple a-b-c correction with roughly similar targets.