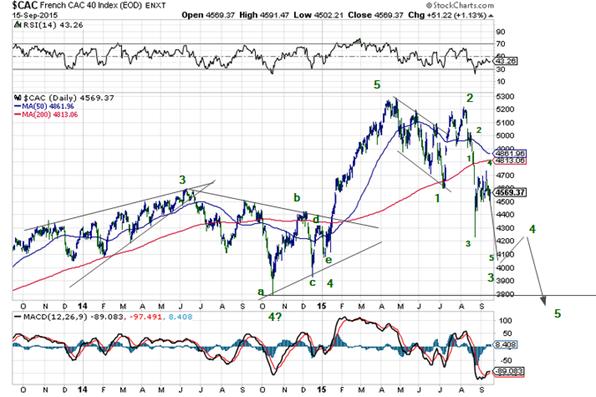 We go to Paris to find out what is going on in Washington. "Après nous le déluge" was the attitude then as expressed by Madame Pompadour. Freely translated it could be understood to mean “not in our time”. The problem is that it is going to be in our time if this chart is telling the right story. As near as I can tell we are presently in wave 4 of 3 of 1. Regardless of where we are in the count we should under all circumstances get to about 3800 on this round. That would only complete a first wave down! The Fed. would loose some credibility if it does not raise rates at least 1/8. But then Mrs. LaGarde would loose credibility after having impressed upon Yellen that she should not do that. Looks like a no-win, no-win .

P.S. Today, Sept. 16, the OECD, Organisation of Economic Co-operation and Development, also domiciled in Paris, in a real Chateau no less, through it’s chief economist Catherine Mann, issued a warning to the Fed. as follows;

“Which path they take is really going to be key,” Mann said. “The disconnect between the dot path and what the market expects represents a real communications challenge for the Fed.”

So what are the “dots” ? They reflect what the voting members on the Fed. board individually expect to see in the future. Here it is from Bloomberg. What it says is that collectively they think rates will rise to 3.4% or so by 2017. For chronically short-funded organisations, that is most financial institutions, this is a wake-up call. 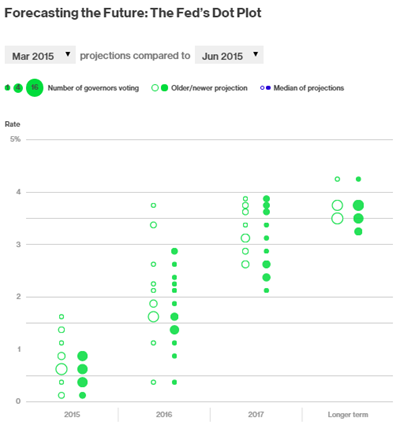 Also it is not, apparently,  a good idea to discourage your daughter from studying that dismal science, economics.