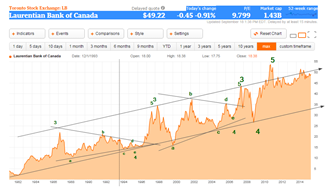 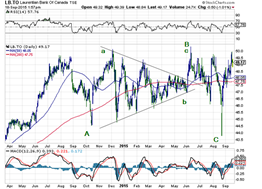 Laurentian Bank has outperformed the TSX by something in the order of 7% during the last year. It trades at a P/E under 10 which is about 20% better than the banks in general. Its earnings, last reported on Sept. 2 were very good and it pays a dividend of 4.5%. Should you buy the stock? That depends.

On an EW basis you are probable about to finish a wave 2 or B up in a correction so either 3 or C is next. Not the best of times. Furthermore you are at the upper end of a well defined channel and, all things being equal ( they never are, by the way), you would prefer to buy at the lower boundary of the channel.

Fundamentally things are a little more complex. Keynes et al believed in their hearts that postponing immediate gratification was not really a sacrifice and therefore it should not command a price. Interest rates should be zero using this philosophy. Apparently, without openly subscribing to this thought (the Fed. cannot as interest rates are their main tool), it would appear that after what was said yesterday they are de facto agreeing as rates will never again go up. In light of this, getting onboard sooner rather than later may well be the best choice.

Then there is that not very well understood little thing called dividend gross up. It is not a minor thing, it is huge and the more so the lower your income! Dividends are after tax profits that are paid to shareholders. If these were taxed as simple income, as in interest, then there would be double taxation, first at the corporate and then the individual level. That would not be fair. Therefore they invented the gross up which serves to add back the taxes paid by the corporation and then they tax you at some arbitrary rate that should even it all out. For 2015 you can earn $43.807 in dividend income without personally paying taxes (including AMT) if you have no other income! At a 4.5% dividend you can therefore buy $973.488 worth of LB shares. That is roughly 20,000 shares. No need for an RRSP or TFSA.