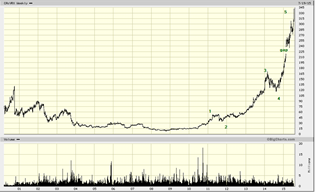 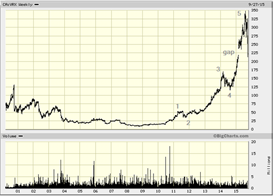 Valeant with an e is really Canada’s only pharmaceutical company. There is, I believe, a TSX sub-index for pharma but it is about 98% VRX so you might as well just buy this stock. This stock has outperformed just about everything and recently the company was actually Canada’s largest by cap., beating even the Royal Bank.

This stock is the example, par excellence, of what a momentum stock is and does. Our friends at Merrill Lynch Pierce Fenner Smith understood this perfectly well when they very deliberately chose the bull as their brand for the simple reason that it was so capable of stampeding mindlessly  in one direction at the slightest prodding of their cowboys. In the process, of course, many otherwise innocent bystanders are sucked into the wake of the charging herd. This phenomenon is not unique to animals, it has been the object of many a scientific study on the subject of group-think where normally intelligent humans congregate in like-minded groups, as in a management team, a board or whatever. If , for instance, the members have IQ’s ranging from a low of 60 (3-year old) and a high of 140 (equal to mensa entry level) and there are, say 10 of them, then collectively their IQ is 1000. Invariable it was found that the group functions at a level that corresponds to the lowest member’s IQ, in this case 60. It seems that in these settings the lowest common denominator trumps everything else and prevails, regardless of the shape, square, round, or oval, of the boardroom table. This works un till it doesn’t. VRX doesn’t work anymore. It closed the gap and is on it’s way to $120 and possible lower.