According to the Dogs of the Dow, Dupont was the best weekly performer this week at 14% up. Next in line was General Electric , GE, at 10.2%.  Of course only the 30 Dow stocks are included.

Here is our usual then, 28th of July, and now comparison; 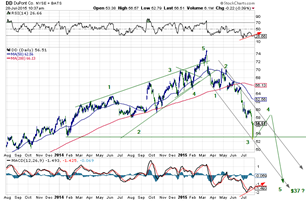 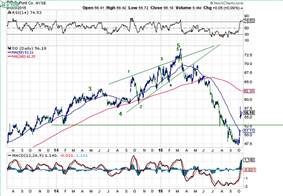 The stock did follow our script but it did so with a bit of a lag going lower for longer. But then the rebound was even larger than expected. Putting all this together suggests that the bounce off the lows is not a wave 4 (of 1) but a wave 2 of 1. At about 40% this rebound may have very little left in it all though $62, the 200 day moving average, remains a possibility. We would sell in view of the Big picture (see previous blogs).

GE was number two. However, measured over about a month and a half it managed to increase by almost 50%. This is almost unheard of for such an ex-bluechip stock. A mini tantrum followed by a melt up?? 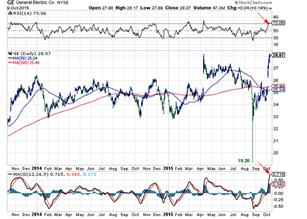