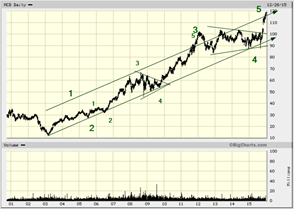 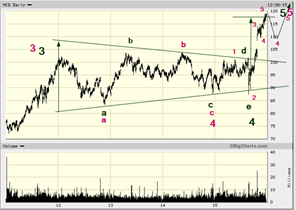 Back in 2012 with the stock hitting the big $100 level we did think that it was a sell.  For four years after that it did trade, on average, lower than that but recently it decided to shoot up almost vertically in a $30 “thrust”.  If that is the correct interpretation those four years probable were a triangle but, possible, just an elongated a-b-c wave 4 (in pink).

In this count wave 3 is the extended wave and therefore there is a high probability that waves 1 and 5 will tend towards equality leaving very little room to rise further. The mouth of the triangle measure suggests that it has already peaked. My gap-in-the-middle approach would allow for a few dollars higher, but then the channel is just fine with the present top. This is a short and a short now!

Fundamentally, if you are old enough, you will remember the days  that you filled up the  gas guzzling Ford LTD stationwagon AND treated the little ones on french fries etc. all out of a $20 bill and still got change back. Not anymore. These fastfood people are pricing themselves out of the market and once people realize that potatoes and salt with sugar water added to flush it down are overpriced and not very healthy the stock will come down fast.