Another look at Natgas. Long-term charts are hard to come by but this one is relatively good and at least 20+ years.

Roughly speaking we have triple bottomed three times (double Dutch??) in the past 5 or 6 years at about (again roughly $2)  Back in 1995 or so that was roughly also the bottom for quite an extended period. That suggests that somewhere around $2 there is a lot of support. However it should be noted that the absolute lows were more in the order of $1.25 (just eyeballing the chart).

In terms of buying low and selling high, the only sure way of making money, it is obvious that with gas down 87% from the peak you are a lot closer to the low than the high. Still I would wait at least for the price to better the $1.90 low of April 2012 before making a move.

The HNU, leveraged up ETF looks pretty good from an EW perspective and RSI; 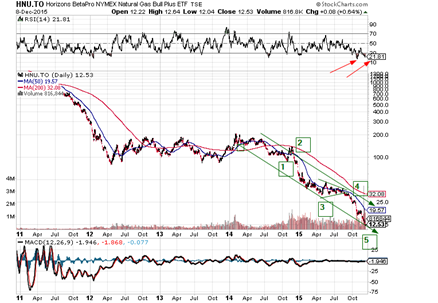 Somewhere here it should bottom.  Here is another chart;