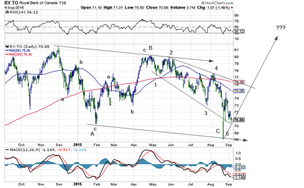 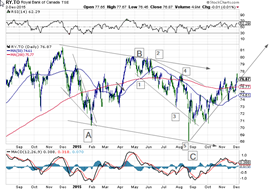 Almost three months ago we had some misgivings about the bear case, at least with respect to our biggest bank. The pattern at the time was just too compelling. On the balance of probabilities it was a rather clear A-B-C corrective flat! As always with EW it is often very difficult to wholeheartedly embrace a possibility that is at odds with your general expectations. At least we put it in a blog. Also keep in mind, as we pointed out many moons ago, that RY trades exceptionally well off the RSI. Invariable both the buy and sell signals, that is below 30% and above 70% work. Keep an eye on that all the time!

Some of the other big banks have similar or comparable patterns. Some do not so one should be careful not to generalize. As far as RY is concerned a new high, that is above $81 is a reasonable expectation. If it happens you will have waited an entire year during which you had to agonize over a loss of 16% in order to earn a 5% dividend. Not something you would want to do a second time.

By the way, a $10 bln. profit for a single company in Canada is a record. Some might think it is deserved, others may think that it is simple obscene.