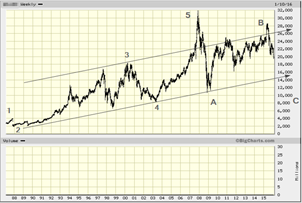 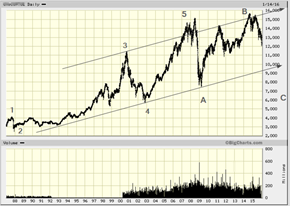 These are not “then and now” charts, they are both as of Jan. 15 2015, that is today. I have deliberately removed or obfuscated the names of the chart in order to leave you, the reader, to guess what they are, or represent. This is not a trick question, that is it is not the same chart twice!

You will notice immediately that the left chart rises at roughly twice the speed of the one on the right, both beginning around 2000 but the left one peaking at 3200 whereas the right one only manages 16000, half as much. Nevertheless all ups and downs on both charts correlate rather precisely and the proportions stay constant over the 28 year time frame. Furthermore the B-wave is very well articulated and in both cases more or less double tops, peaking at or near the upper trend line.

These charts are of entities that are oceans apart, have completely different economies and are subjected to totally different influence spheres. The only common element is that once upon a time they were both part of the British Empire all tough they matured in different ways. 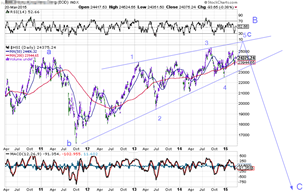 As usual the “wedge” was a super clear and predictive pattern. Also it targets the base which is still about 4000 points away at the very least. This is perfectly in line with our expectation for the other index to drop at least another 2000 points.

If you haven’t guessed yet, the charts are of HK’s and Toronto’s indices. Talk about the correlation approaching 1 globally.