We never expected this stock to trade above, say, $120 or so. (and before that much above $105). The B-wave did not materialize and simple proceeded to go onwards and upwards. Just last December, a few weeks ago, the 24 analysts that cover this stock unanimously thought it was a buy, those that didn’t changed their minds. Keep in mind that this is after a 5-fold increase in about the same number of years. The p/e is 16X and the yield 3.4%, pretty normal.

We are quite certain that you do not want to own this stock in the next few years. The EW pattern, though perhaps confusing in the middle, is perfectly straightforward at the end, which is a clear 5th wave from the lows of 2009 to the highs around $160. This expectation is not coloured in any way by moves of HQ or extra-curricular activities of senior management. The “logical” target is about $30.

EW is free of fundamentals, let’s look at them anyway; 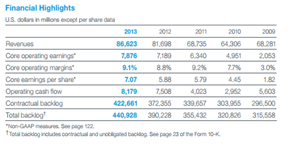 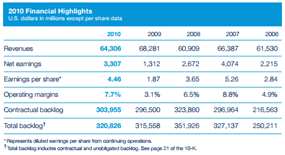 Boeing has received huge tax incentives from the government and spends an offensive amount on share buy backs. Therefore both earnings and earnings per share are shown in the above tables from 2006 to 2013, a period that covers most of this 5th wave. Neither of these have grown anywhere near the same rate as the stock. Earnings per share are up by , maybe , 50%. Net earnings may have doubled on average.

Governments around the world are closer to being broke that ever before. This crimps  military spending but also a good part of the civilian sector as many air carriers are essentially government owned or subsidized. In short we think this stock is a sell.