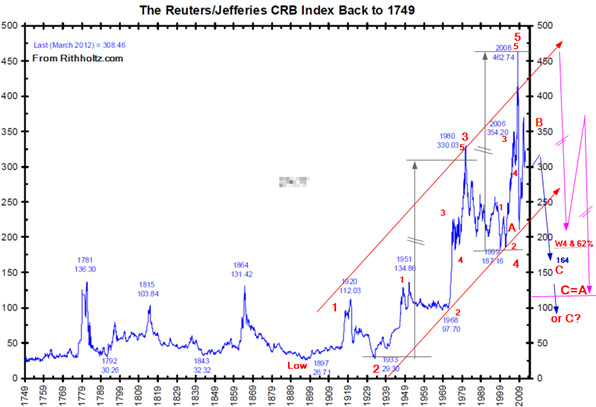 This chart I found somewhere on Barry Rithholtz’s  website.  I have no idea how accurate it is. Obviously the CRB (Reuters Jefferies) index has not been in existence for all this time so most of this chart must be reconstructed. Whatever, the main point is that it is possible to put a 5-wave EW count on this chart, starting in 1897 and ending in 2008, 110 years roughly speaking.

The hundred plus years before that where clearly characterized by a world economy that fluctuated between inflation and deflation but otherwise was pretty well flat as far as the eye could see. Intuitively it is clear that this index is a function of both inflation/deflation and productivity. With inflation rising this index should rise, alternatively productivity gains should be reflected by a dropping index. Apart from that supply shocks (new finds) and or extrinsic demand shifts (as with China over the last 5 to 10 years in the context of metals) can have a significant impact on individual or groups of commodities but using the index should dampen those effects. No farmer has ever woken up in the morning to find an extra hundred head of cattle in his fields.

Unlike other “values”, commodities are usually stored in warehouses or they are in transit. In either case there are warehouse receipts and or drafts drawn on buyers and accepted by their banks under letters of credit. These trade bills constitute the nearest thing to money so it is not surprising that the Fed. was created ( starting in 1910) to facilitate the discounting of these bills, that is create money based on commodities. It probable is not a coincidence that the CRB index shoots up precisely at the time the Fed. was created. Back in the eighties the Fed. was obsessed with the money supply, M1 , M2, M of zero velocity etc. and then they started to concentrate on capacity utilization, and later on the CRB index as it existed then. All of these are either money or a proxy for money.

So can we predict a bear market? In our humble opinion absolutely yes. We did!  That is we were able to accurately identify large sections of the moves even if we did not necessarily identify a top, perhaps simple because we were not looking. Judge for yourself;

First of all, with the benefit of hindsight, the wave count shown is perfectly acceptable even if one could have made the argument that we had only completed wave 3, rather than the entire 5 wave sequence. However, the fact that wave 5 is roughly equal to wave 3 but does all that in in 9 years rather than in one hundred years clearly was a wake-up call. Something is happening at the start of the new century and it is not Y2K. At that point one should have anticipated an a-b-c correction. Again we were asleep but here is our first chart of Jan.2011; 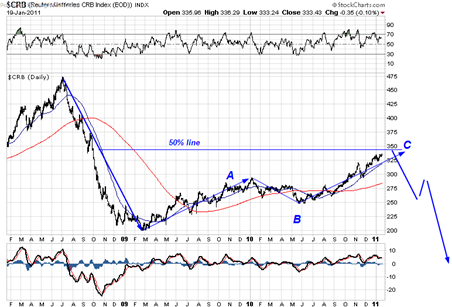 The assumption was that the first leg down would be retraced by about 50%. That is the “safe” thing to assume. As it happens the retracement continued to the next Fibo. point, 61.8% at about 370. That is an error or 20 crb points but the arrow down shows a further drop to roughly 150. The low so far is at 164. Comments at the time, the blog is still on this website were; "In short, if my Jan views come true anyone owning oil, gold, coal etc. etc. stocks will get devastated. The TSX with its large exposure to these commodities will get creamed.”  Many of these stocks had yet to make their tops, either also as b-waves or in an absolute sense so you had all the time to get out. Where do we go from here?

EW works like a stop-light, it too has 3 colours, go ahead, stop and wait. From the top chart you can see that we have already dropped to the level of the 4th wave of previous degree, in fact for both the entire move and also the 3d wave within it. 61.8% down is at that same level so we have done that. Equality between waves C and A down has not yet been achieved, that is at around 120 or so. Will it go that far? Maybe, maybe not so treat it as a yellow light and wait. If you manage to catch 2/3 of a move you are right up there with the best.