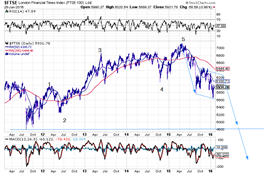 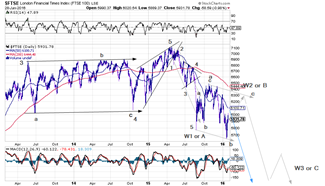 The FTSE is one of the worst major stock indices in the world, down about 21% which is not really all that surprising when you consider that it contains a good number of the large integrated oils like Royal Dutch and British Petroleum. Beyond that there are also a good number of banks that have fared only so so.

At the lows we were where we were 3 years ago, and we are pretty sure that we are on our way to, at the very least, 4800 as that is the start of this last leg up (wave C of an A-B-C off the lows of 2009). The question is simple how we are going to do that. I suspect that any moment now we could enter into a 3d wave and accelerate down. That would be my most favoured outcome.

There is , however, also a possibility that the downward acceleration will be delayed by several months as we complete a much more complex wave 2 or B. In that scenario a series of 1-2s would become a b wave in an a-b-c for wave 2. An upside target would be around 6300. Then the index should resume its drop. A similar delay is possible in the DAX.

Recent experience with Mr. Draghi suggests that market participants still firmly cling to the myth of Central Bank omnipotence. Perhaps just a few words are needed to extend the “good” times. We do prefer the straight down from here scenario (in blue).