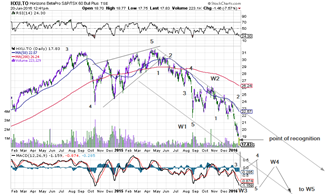 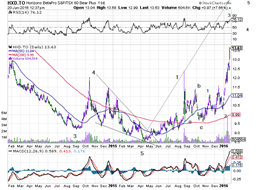 These are the Yin and Yang, bulls or bears double inverse etf’s. They are often repriced to keep the nominal price at a tradable level, so be careful to make direct comparisons with previous charts. We have been too early often but are last blog was spot on.

The HXU, that is U for up, on the left is pretty well a replica of the TSX but not quite. In any event it has probably just reached the point of recognition. If so than it should go down about as much as it already has. If not than perhaps we will need a >6oo point drop or something like that.

At this time you, of course, want to own the HXD, D for down as it acts inverse to the market. There is nothing much between here and $25 to stop this etf.