Then , a year ago, and now charts as usual; 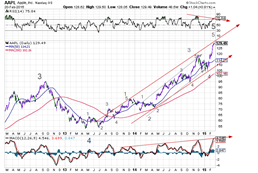 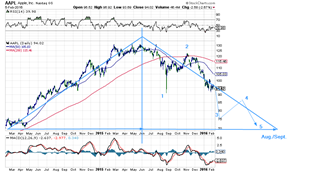 A year ago we predicted the stock was about to, or had already, peaked at about $128/9. It did go fractionally higher after that, three times in fact, but it would have been an excellent exit point saving you about 28% of your money. (When you talk to your neighbour etc. etc….. you know the routine).

Our first target was $92. It has briefly traded at $91.80, overlapping the top of wave 3. So now the question is where from here. Down. Down to about $70, at least. One technique that is easier to implement than than the rounding top which requires a circle, is to simple assume that things go down at the same rate they went up. That is easy to construct as per the chart on the right, $70 by Aug./Sept. The reason is simple as well. We are going into the year of the monkey and China is now Apple’s largest customer. Monkey see, monkey do! There will be tons of similar products competing with AAPL. They will therefore have to stay at the forefront of innovation which is getting increasingly harder to do, particularly in a market that is starting to get a little saturated, so “growth” will suffer. In the meantime margins will be compressed. The stock is excessively over-owned, particularly by large funds, hedge funds and the like.

Then there is that 200 bln. pile of cash sitting out there somewhere. It is a lot less and if you look at their balance sheet borrowings and deferred taxes they are almost as large, so this does not mean a lot other than that they are doing all they can to defer repatriation of profits.