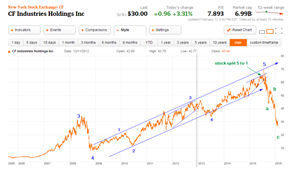 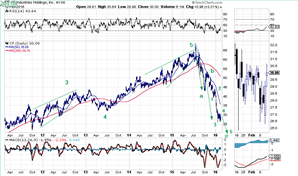 For the record we did think the stock was peaking in 2012 at $225, or $45 on an after split basis. Do not confuse this stock with CF on the TSX, Canaccord Financial. The charts look equally miserable but it is in an entirely different business.

CF stock is trend persistent. A term usually reserved to describe the performance of a commodity. That is what CF does, it makes the commodity ammonia NH3 , the stuff that gives livestock farms that very distinct smell. They do that, I believe, by squeezing the N out of Natgas and converting it to a liquid or a solid. It is used almost exclusively as a fertilizer and consequently they are competitors of the potash miners.

Something went horrible wrong mid 2015. They decided the stock should be split 5 to 1 effective June 18,2015 not realizing that the market was about to do that for them. This creates a loss illusion for those that cannot read their statements, which is probable at least half of them. When the stock drops from $350 to $70 the trend persistency is broken and there is a feeling that the 5-fold increase in the number of shares does not fully compensate. If you think this is nonsense, go to England.  There used to be 12 pence to the shilling and then they went metric sometime around 1971. From that point there were only 10 p to the shilling and 10 shilling to the pound. A good part of the English population still believes this was a conspiracy by the then government to rob them of 20% of their wealth. That sentiment still persists.

The stock looks to be doing a standard a-b-c correction. It got to about $26 which is close to 61.8%. Add to that that the c is about equal to the a, and you have a good case for assuming that the drop is complete. Forbes and Credit Suisse, both well known for their insights in manure, have the stock as the TOP PICK! We would hold off just a little. There aren’t 5 waves in the c, there must be one more down wave, perhaps to $20. The yield then at over 4.5% would indeed make it an attractive dividend stock.

For the sake of completeness we add the chart of the other CF, both then, Dec. 2011, and now; 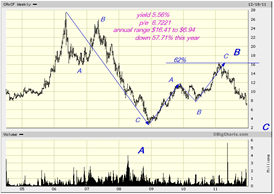 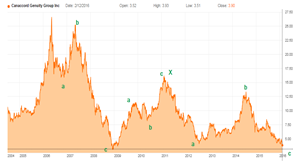 As usual it took longer than expected, but we will get there, that is below $3. The wave count is now purely academic. The question is will it survive?