The China Fund, Inc. is a non-diversified, closed-ended management investment company launched in April 1992. Its objective is to achieve long-term capital appreciation through investment in companies and other entities with significant assets, investments, production activities, trading or other business interests in China, or which derive a significant part of their revenue from China.

This is a proxy for the Shanghai index; here are two charts, then Sept. 2012 and now; 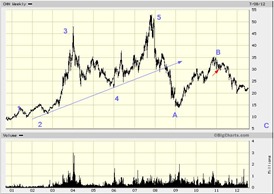 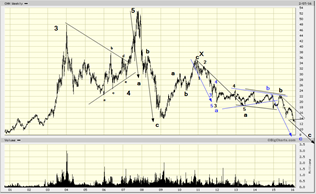 Since that time the fund has dropped about 50% and it is well on it’s way to our target. Originally we were looking for a simple A-B-C. That does not look to be correct. First of all the huge initial drop is very symmetric, suggesting a zig-zag. Secondly the retracement is close to where the b wave is. This points towards a double zig-zag. Furthermore , not that it matters now, wave 4 is probably a triangle.

So we have an a-b-c X a-b-c. The second b can be a triangle (in blue) or a running flat (in black) Both suggest a target of about $8 which is pretty well the low in this chart. This Google chart goes back a little further;

The low was on Sept. 4, 1998 at $5.50 and that is probable our target as it could be a 4th of previous degree. ( For EW enthusiasts; There is a clear overlap between 2 and triangle 4. That is obvious, but there is a school of thought that says that it is where the triangle ends that counts, and then there is no overlap). Bubbles normally also retrace back to below their starting point. The channel does support the notion that everything on this chart is one single 5 wave sequence.

Monday the market in China will reopen after having been closed for 9 days. The fund, however, trades in NY and has traded all this time. It is down about 4%, maybe that is an indicator; 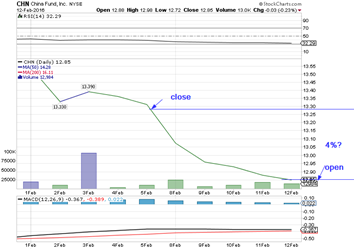 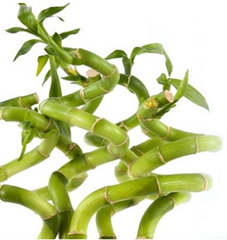 By the way, for about 30 years, that is a lifetime in the world of investments, you would have had no capital appreciation on this fund, this is while China was the fastest growing economy over that time. And what about distributions? Well here is the answer;

Total investment returns reflect changes in net asset value per share during each period and assumes that dividends and capital gains distributions, if any, were reinvested. The net asset value percentages are not an indication of the performance of a shareholder’s investment in the Fund, which is based on market price.