Under the Dodd-Frank legislation the Fed. is required to give “guidance” to the banks under certain stress situations. I happened to read about this in one of Maulding’s articles. It is publically available at;    http://www.federalreserve.gov/newsevents/press/bcreg/bcreg20160128a2.pdf

This is quite an elaborate document so I will spare you the pain of reading it in its totality and get right to the point. Just like the Fed. transmits vibes to the public in general about what it might do with interest rates, it also does this in great detail with regard to a number of variables under certain stress situations, including the level of the DJIA. The idea behind this is that the banks would somehow be better prepared. Here is an example from the Feb. 2016 report; 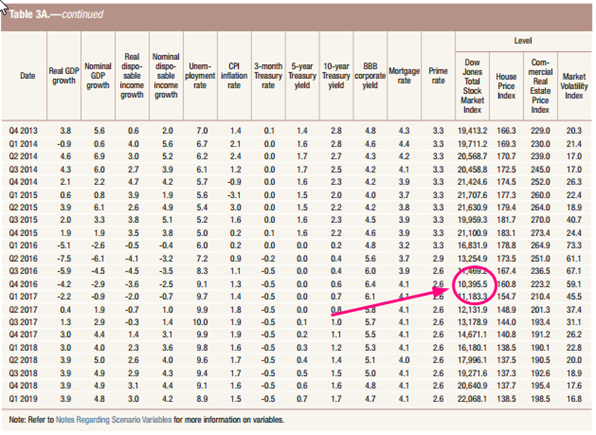 Granted that this is what might be expected under truly severe circumstances, it is still a little unnerving that even the Fed. can see a situation develop in which the DJIA drops to 10395 (on a total stock market basis). As the high was around 21707 that implies a drop of 52%. On the positive side it would apparently only take 7 quarters to recoup the loss.

Negative short-term interest rates are included in this most severe adverse scenario. Are we almost there?