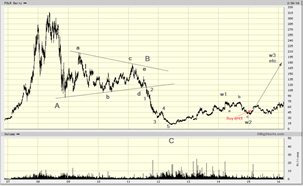 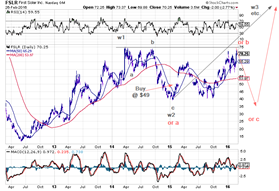 First Solar has worked out well, so far at least. Looking at the big picture we had, and still have, much higher levels in mind for this stock. However, we are approaching a minor double top situation and, as we have said ad nauseam in this blog, it is always smart to step aside at these points in time.

The buy recommendation, we were not very alert, was at $49. Here we are a year later at $73. It should perhaps trade a dollar or so higher but we do suggest selling the stock at about that price. That is a gain of $24 on $49 or 49%, more than you get on your GIC.

The solar technology has a very bright future but the influence of China as a producer and the miserable inept interventions by various governments and their regulators,  make for an irregular path up. Playing it safe is the way to go.

See also TAN, where you should also have exited the trade at the double top level. It may be a buy again soon,