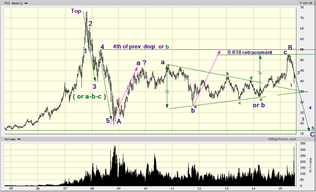 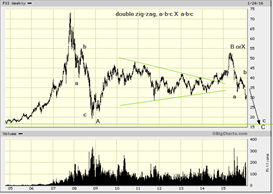 In these blogs we have always taken a dim view of China, not because we have a predilection for the comic depiction of all things Chinese being confined to the world of laundry and dry cleaning, but because we think that China is the embodiment of the largest mis-allocation of capital ever in the history of mankind. That, of course, is the basis for depressions and also for Schumpeter’s creative destruction.

Last year we showed how well many of the tenets of EW were met with the chart on the left. Things actually moved along at the speed they should have. Recently we reached the lowest level of the triangle that separates the two zig-zags in this double zig-zag. It would not be surprising if the pause in the second zig-zag becomes more complex than it presently is. Even so we should continue to, at least, 16 or so. This pattern is different from the large flat that we have seen in many mining and commodity stocks. The C wave does not have to unfold as a 5-wave structure as I erroneously indicated on the July chart. Instead it should develop as a zig-zag which follows the 5-3-5 pattern. What we do not know for sure is if the 3 is done and we are in the second 5 part, or if it will take a little longer. Considering the steepness, it should not take very long before it continues down.

The PBOC, Peoples’ Bank of China, should be completely impotent to do anything about the existing excesses un till such time that the have dissipated. That is a matter of time, not monetary stimulus.