The not so usual part 1 and part 2 charts; 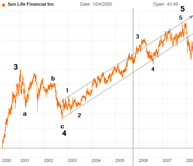 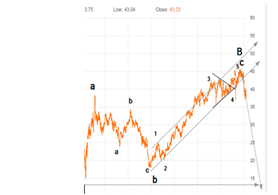 On the left are the guys that bring your fat cheque right to where you happen to be on the beach in the Caribbean or on the golf course. They are the wealth managers of the future and do life insurance on top of that.

They demutualized in 2000 and basically took off by tripling, peaking in 2008. Had I told you then that the stock would almost return to that starting point, that is lose 2/3 of its value you would not have believed me.

Just for fun I brought up another chart. At first blush you must agree that they look pretty similar. So if now I would suggest to you that this stock might lose 2/3 of its value, you would, again, not believe me.

So here is what we are looking at; 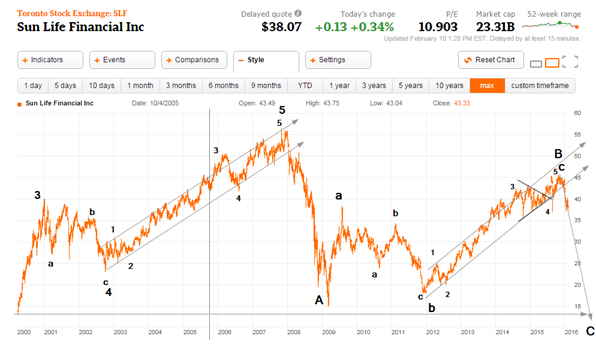 There is a small difference between the 2008 drop and the one that is coming. The first drop was an A wave in a “flat” which consists of an a-b-c all though the b is often barely recognizable. The coming C wave should be a straightforward 5 wave sequence without any b or pause. It should, if anything , go down faster. Why we do not know but China may be part of it.