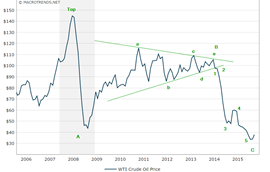 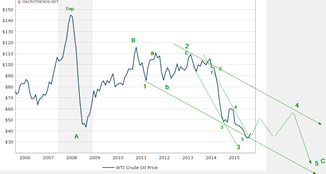 Just for greater clarity it might be useful to point out that oil could still go lower, albeit after perhaps a year of sideways to higher prices (see earlier blogs!).

There are two ways you can count oil. Both are essentially the standard A-B-C corrections. The first possibility has the B in that pattern as a triangle. It is a very compact one and a little distorted but a triangle nevertheless. That triangle then absorbs all the ups and downs between 2009 and 2014. The wave C, that must itself have 5 subdivisions, drops down like a stone in much the same way as it did during the great recession. The entire A-B-C pattern was complete early this year and from here on we are in the new bull market.

The second possibility is that the above is all wishful thinking. The C wave started much earlier in 2011 and does an initial 1-2 into 2013. From there wave 3 down takes us to the recent low of $26 or so depending what contract or spot price you are talking about. The roaring bull market the last few weeks is the start of wave 4 that could take as long as a year or more to complete. Then wave 5 takes oil down to about $10. I prefer this count. 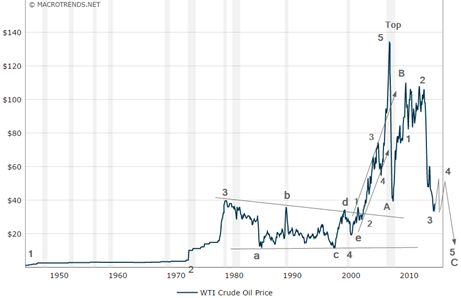 What it means, if it is correct, that you have a whole year to profitable play with oil stocks, just do not get married to them.