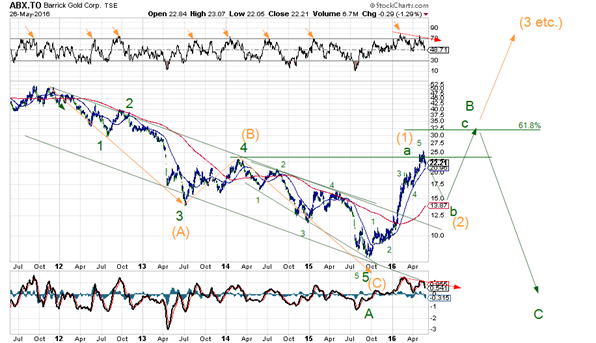 We have been very lucky with our predictions for ABX. All though not absolutely perfect we did manage to capture the main moves and draw a tradable map. What is next?

First of all, the drop from the highs in mid 2011 is undoubtedly either a single 5-wave leg down followed by a single 5-wave corrective up move, OR a complete A-B-C correction that retraced about 85% of the value of the rise from 2001 to 2011, give or take. We preferred the former interpretation but are not at all confident about that. If the latter interpretation is in fact the correct one, then we have completed an initial wave 1 up and are presently in wave 2 (see the beige annotations). In either case we are confident that an initial wave (one or a) is complete. This is because the diagonal wave 5 or C is completely retraced plus a bit in a rather violent manner.

Furthermore, looking at the technical indicators, it is interesting to note that the RSI peaked out more than a month ago. More interesting than that is that this has happened 7 times before during the time of the above chart, and that in every instance without a single exception, the RSI would move from the overbought extreme to the oversold extreme. This is the 8th time and it has not done so yet. We therefore still believe that this wave b or 2 has further to go, perhaps to about $14.50 or so (about where the 200 day moving average will be at that time). At that point it would be a screaming buy under BOTH scenarios! From there wave c or 3 should take us to roughly $32 or so, again under either scenario. The beauty of this forecast is that you do not have to go to the edge as it does not matter all that much whether you buy at $17 or at $14, if it gets there, because you will make a very healthy return in any event.

As a word of caution we want to make it clear that this is an unadulterated EW analysis without ANY fundamental inputs. If you see how fast the fundamentals changed two or three months ago, you must conclude that they are irrelevant in terms of predictive value. Like a herd of buffalo the gurus will run over a cliff without batting an eye, or alternatively, they always have only one outcome in mind at all times and that is straight up.