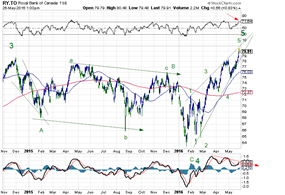 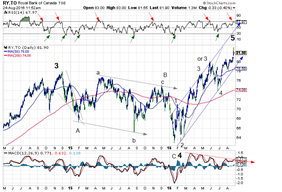 In our May 26, 2015 blog we discussed the possibility of this stock exceeding the old high which was recorded according to some chart providers as $83.30.  Today we almost got there and as Yellen is talking again at Jackson Hole this Friday, that may just be enough for a last hurrah. We had expected a wedge diagonal to form but instead we seem to have gotten a simple 5-wave 5th wave (maybe). In the extreme this could even go as high as $86.

RY has been impervious to anything potentially negative, low interest rates or flat yield curve, the collapse of oil, the overextended borrowings by large segments of the Canadian population, the (continued) extreme valuations of  housing, the regulatory suffocation environment as in Basel 3, Dodd Frank etc. etc., the recent introduction (but not yet fully implemented ) CRM2 rules for investment dealers and their advisors and so on. Apparently all this is easily offset by quasi monopoly power, the lack of other investments and so on, but perhaps not much longer.

The RSI, at both tops and bottoms has shown its reliability in spades. Also from the lows of Feb. this thing is up almost 40%. A prudent person should sell.