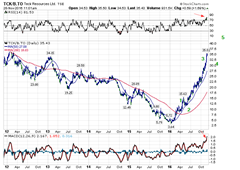 We got this one just right but got out way too early. If our EW count was correct, and it certainly seemed to be, we completed  a large flat A-B-C at the end of last year. Since then the stock is risen, presumable, in a first wave of a new bull market. The only caveat is that we have never ever seen a rise of this magnitude in such a short time frame, almost 10x in as many months. We are now going vertically.

If there are still believers in the Efficient Market Theory, I suggest they have a chat with the person that sold at $3.64 early January. Clearly Fed action all around the world has created a binary system that does not adhere to the good old premises of yesteryear. If EW itself still applies is an open question but if it does the upcoming wave 2 will wash out most of wave 1.