The Dow Jones Transport Average index is the oldest of the two ( the other is the Industrials), at about 130 years (1884). It consists of 20 different stocks but only one survived that period, UNP or Union Pacific. The index is price weighted. Here it is on the left; 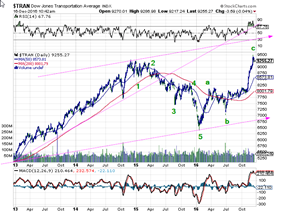 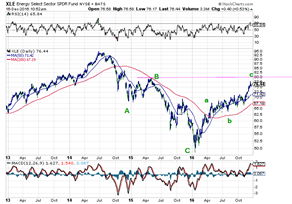 Now you will notice that both the DJT and the XLE dropped a lot, about 30 and 40 percent resp. only to regain their composure by both gaining about 50%. More importantly, the timing of the ups and downs are almost perfectly synchronised. This is extremely odd as “fuel” is a large input cost for any transport company, whereas it is a major output or revenue component for the energy companies. To find such a positive correlation – at least over the past 4 years – is downright amazing and contrary to most economic tenets. It is even more amazing as with walls all over the place and high import duties, taxes or whatever, you would expect less demand for transportation.

From an EW perspective both up moves from early this year look, for the moment at least, like B-waves. In the DJT that would have to be an irregular B-wave since it is making a new high. Looking at two components of the DJT, Fedex and Ryder we get the following; 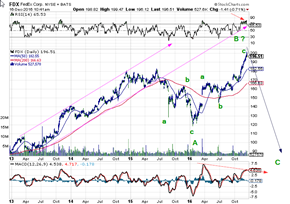 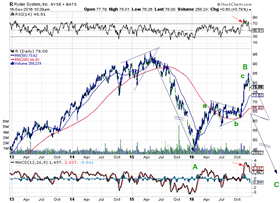 Again both display a B-wave, FDX an irregular, and Ryder Systems a normal one. Both can, of course, still morph into something else but for the moment this is the best count and it does not bode particularly well. A closer look at UNP supports this outlook and, by the way, coal is one of UNP’s most important businesses.