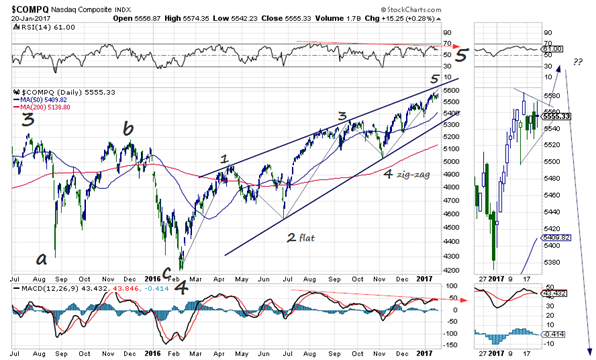 Just 12 days ago we had a chart of the Nasdaq showing , essentially, the same picture except that a little time has been added without much action. So far this is a near perfect setup for a very sharp drop all though the Fed et.al. will provide the usual resistance.

This, as mentioned earlier, is a wedge. It is either a “diagonal” 3-3-3-3-3 or a straightforward 5th wave, 5-3-5-3-5. Diagonals are usually followed by a rather violent reversal all the way back to the base. This is not necessarily the case with normal 5th waves, but there also, the target is the 4th wave of previous degree, so the same level. There is still a little potential to the upside but it is limited if wave 3 is not to become the shortest!

Untill yesterday I have watched the circus of the US presidential elections with mixed feelings, mostly amazement. Yesterday’s short speech at the offices of the CIA went beyond what is acceptable even at the low standards of a New Yorker with too much chutzpah.  Clearly this fellow suffers from some form of narcissistic personality disorder which, combined with other circumstances, may lead to the universal understanding and recognition that he is simple unsuited for the task. That could become a tipping point for the markets.