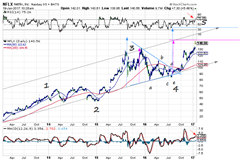 Here are the long and short term charts for Netflix. We show a count on the long term chart that suggests a completed , almost, first five wave sequence. We are not wedded to this idea as we may just be looking at only waves one and three complete. i.e. the degree of the waves is smaller.  However whether or not the next leg down is going to be a wave 2 correction of the complete move up, or a wave 4 that just corrects wave 3, the downside targets are  both at least $80.

As it is not perfectly clear where the triangle may have started, we use both measurements to get an idea of how high the stock may peak. We show the two in blue, the bigger one, and pink. the smaller one. $165 and $150 is my best guess. Perhaps it would be advisable to sell at the lower of the two, $150. Either way, if this is correct, the stock could be almost cut in half. With a Beta close to 1.70 and a P/E of 330,  that is entirely within the range of possibilities.