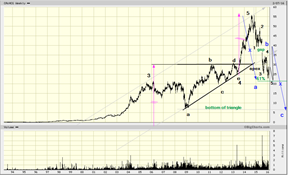 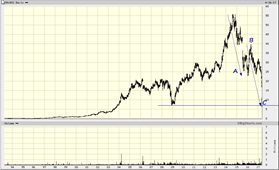 One year ago we anticipated a rebound to, roughly $40 and then down again to the 4th wave of previous degree and/or where wave C would be vector equal to wave A. Today we hit $6.32 which is essentially the target. However this entire drop from the $55 high could be either an A-B-C X A-B-C or simple an A-B-C. In the latter case the C wave, starting from near $40 would have to subdivide into 5 waves. It does not! See below; 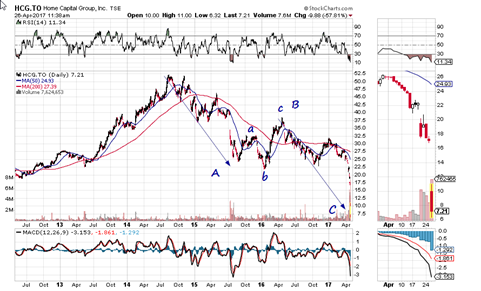 As you can see , we must be either in wave 4 of wave C, or, worse, in wave 4 of 3 of C in which case we still have 4-5 and 4-5 to go. Todays drop is , given the large gap, clearly a third wave. Having said that, it does not necessarily follow that the ultimate low will be substantially below where we are now.

Probable it should be bought soon, but I have not followed recent developments too closely to be able to assess if the worse is over. By the way, HCG is not the only financial institution that used agents to meet growth targets. Confederation Life falls into this category and so does at least one credit union that I am aware of.