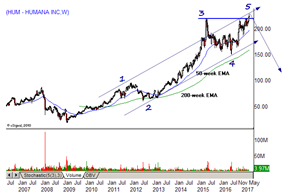 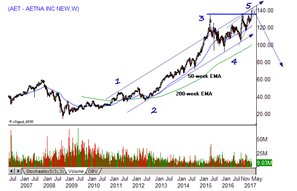 Here we have two of the larger healthcare providers in the US. Up to about Feb. of this year there was talk, and a lot more than just talk, about a merger between the two. The talks fell through but the objective of such a merger would undoubtedly have been to solidify regional monopoly advantages.

With all the ups and downs with the “repeal and replace” of Obamacare it is as plain as daylight that both these stocks have , or almost have, completed fairly clear 5-wave sequences right into their present peaks. All of this on declining volume.

Without looking at the very big picture, this 5-wave sequence is probable a 5th with in a larger sequence, but if it is not it would be a first wave in a new bull market. In both those cases we should expect a very deep retracement before the trend continues. Also in both cases we are close to the upper trend line, if not already there, and the last leg up, at least in the case of AET, looks very much like a wedge which confirms it as a 5th wave.

In terms of the fundamentals it is worth pointing out or explaining that insurance is always about spreading the good and the bad, which is essentially why almost the whole world deals with this by opting for a single-payer model, except of course the US. In maritime law this is best explained by the concept of “general averaging”. In the event that a ship is in danger and cargo is jettisoned off the deck in order to save it, the loss is spread over all the cargo evenly so that the lucky and unlucky owners are dealt with proportionately.  Without that no insurance will ever work and any plan without it is doomed to fail. That is what these charts are telling us. Time to get out. Alternatively have a look at ETFs like RXD, inverse and 2x leverage. As always talk to your broker.

P.S. We would also refer to our blog and analysis on IBB, of about a half year ago. To date this ETF has not managed to get above the level it had then. Furthermore the initial drop is a clear 5-waves or a-b-c and all the subsequent action is going nowhere, suggesting a correction for wave 2.