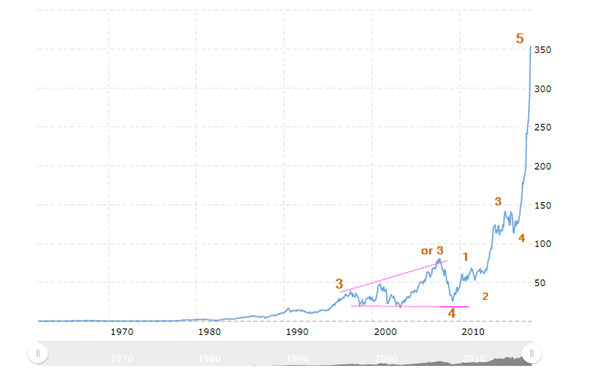 At the time of Trump’s inauguration this stock was somewhere around $150 so it has rallied  about 200 points since then. Is this fear of missing out, FOMA in short, or is this a real Trump rally. You may recall that Trump at first trashed the company for overcharging a few billion dollars for the building of the soon to come new Air Force Ones, the presidents mode of transportation. Then he had a great campaign-like gathering at one of the Boeing hangars, a hughly successful event. Next Boeing files a complaint against Bombardier alleging unfair trade practices and the import tariffs are set to increase by 300%, also the company comes to an agreement for a joint venture,  an effective take-over, of the one competitor to Bombardier, Embraer of Brazil. Now Canada’s acquisition of new Hornets is possible in danger. Overall the company’s involvement in defense activities is enormous boosting its prospects given Trump’s love for all things in uniform.

Whatever the case, and despite our incorrect call for a peak around $250, we still think you should be out. This is complete madness. The stock was good for almost 1000 Dow points as it goes straight up. Keep in mind also that building planes is hard to account for. Everything is predicated on the “normative” number of planes that they expect to build. This is pure guesswork right from the start.