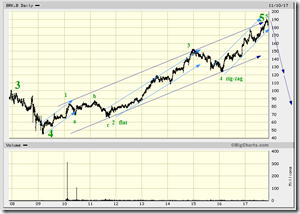 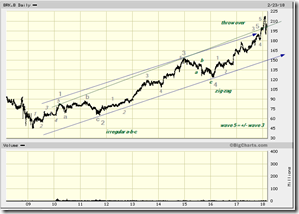 So we expected the stock to peak at about $190 plus. It actually went to $217 and change. This is what “throw-overs” will do but, despite that, the EW count was near perfect. It is a clear 5-wave sequence and there is alternation between waves 2 and 4. Wave 5 is almost equal to 3 which is normal if it is not equal to 1.

So why the difference?  The oracle of Omaha gave one explanation. Notwithstanding the fact that he opposed the recent tax reductions, he made it clear that just in the latest quarter the benefit to him, or more precisely his company was $29 billion. This, according to Trumponomics, will soon trickle down to the little guy as Mr. Buffett buys his next 400 mln. yacht, that is a whole fleet of 60 yachts. The problem is that these yachts are mostly built in the Netherlands or Italy. On top of that Mr. Buffett is reportedly a very frugal man who still lives in his first home. Time will tell as they say.