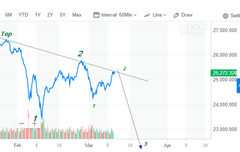 We had a 1-2 and from there another 1-2 but of a different (smaller) degree. If both are to end up looking more or less similar, that is wave 2 should retrace roughly 75% of the wave 1 before it, this last wave 2 could go as high as 25,400 , then wave 3 should start. Notice that in this event the two 1-2s look alike. like fractals.

Some have suggested that we might be tracing out a triangle and that there is yet another leg up to go. If our assumption is correct, that is if the first leg down from the peak was indeed a 5-wave affaire then this cannot be a triangle in the making as ALL legs in a triangle must be 3s. Also the new high in the Nasdaq does not necessarily support the idea that all other indices need to follow. There are irregular patterns that allow for a B-wave to exceed the starting point of an A wave.