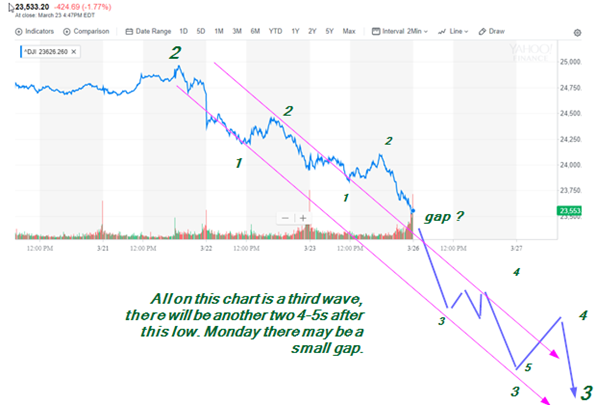 It is sometimes quite hard to come up with a plausible count, certainly in advance of events, but that is the point. Here, once again is my best guess for Monday and a few days thereafter.

We are in the third of the third which is often where gaps occur. Why not this time. If you are still wondering why, how about the argument that markets are grossly over-valued by almost every metric. What will be the trigger? Anything. Another “Stormy”, the third in the last few weeks. The anti gun parades in the US. Or how about Mr. Bolton becoming National Security Advisor. We know that the UN is a hotbed of intrigue, dirty tricks etc. etc. so this former ambassador is hardly the naive and innocent gentleman. In fact he is deeply involved through his “Super Pac”,  the American vehicle to subvert election contribution rules, which used and paid in excess of 1mln. dollars to none other than Cambridge Analytica. His appointment fortunately does not require senate confirmation and he already promises to sweep the WH clean. It takes a thief to catch a thief!  There are a lot of other triggers.

I try to draw these charts proportioning things more or less accurately. This time I cannot exclude the possibility that the index will drop at a much steeper angle than indicated. Also this interpretation could still be dead wrong which, of course, I do not believe.