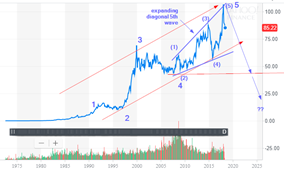 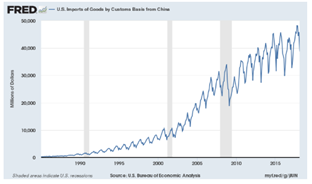 Walmart is the largest private employer in the US.with approximately 1.5 mln. “associates” in the US alone and another 1 mln. elsewhere. It is a stock company but for all intents and purposes privately run by the Walton family. It has about $480 billion in revenue a year, the highest of any company in the World.

Despite the different timeframes of the above two charts it is hard to escape the notion that there is a strong correlation between Walmart’s stock value and the volume of exports from China, according to US customs. Moreover exports from China to the US pretty well equal sales by Walmart, both roughly at $500 bln.

So, after this very scientific evaluation, one cannot help but wonder what would happen to WMT shares if the US administration succeeds in its attempts to reduce imports from China by about $200 bln. over the next few years? Will the stock drop by 40% as well or a little further? EW suggest a drop to about $43, or 60% ( the high was at about $105), where the expanding diagonal triangle starts. What about jobs, jobs and jobs? Perhaps by a similar amount and definitely as an unintended consequence.