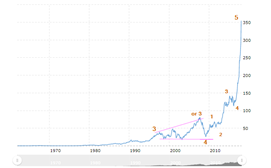 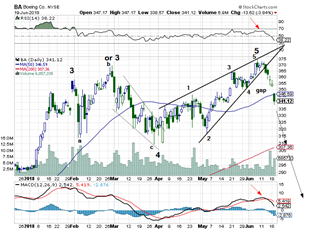 The chart on the right is from last January. We repeat it just to reiterate our sentiment that this stock may have gone too far to fast. Despite that, on April the 9nth we concluded that the drop was corrective and should therefore be followed by a new high, which we recently got by a few dollars.

Trump has been inconsistent in his treatment of this company. First he complains about the costs of his two replacement Air Force Ones, but after shaving off “billions” he celebrates his first party in the hangars of this company which must have been worth a tidy sum in free publicity. Then it occurs to him that Canada might deliberately be undermining the first military apparatus of the US by producing so much aluminum ( the correct “comparative advantage” to use standard trade lingo, is cheap hydro or electricity a major vanishing input. ) Yet in order to apply his notion of the art of the deal he has to tease a little so he postpones the actual implementation, which the market had anticipated anyway, so nothing happened. Then with the help of his new found friends Larry Kudlow and Peter Navarro he wakes up to find that our Prime Minister Justin is a backstabber etc. and at the same time that China, who everyone knows is the real enabler of the Kim-Trump photo opt, is still stealing the US blind. So the tariffs go back on and now they may actually be implemented even if that has not materialized yet. In these hard to follow twist and turns one thing that must have escaped the presidents attention, despite almost daily use of one or both 747s, is that these birds are actually made for a good part of aluminum. A 25% tariff, when none will apply to Airbus, can have rather significant competitive consequences. This is what you get with one-dimensional thinking.

This was one of the best on the way up which usually implies that it will also be one of the best going down. There are a lot of air pockets and we are nowhere near normal cruising altitude.