This folks make equipment for surgeons to do minimally invasive surgery by remote control. First developed by a non-profit foundation it quickly drew the attention of the military where its advantages were obvious. Sometime around 2004 or so it merged with a rival which ended a bitter dispute and it was blue skies ever since. Here is the chart, long and short term; 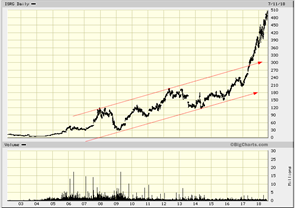 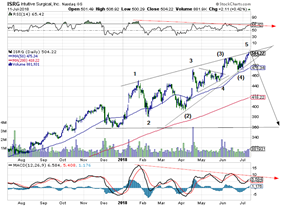 At 1.7 million a piece of equipment like this must be very sophistic. Nevertheless the very basic essence is that it is architecturally little different from your RC (radio controlled) model airplane from 80 years , or more, ago and in most applications is not even remote, being hardwired instead. The intuitive part is a complete misnomer as one of the objectives must be to reduce the subjective elements as much as possible in favour of a more dogmatic approach. Originally the names for these “machine” were well chosen as they conjured up images of God. Zeus, and or unlimited inventiveness, da Vinci.

Today I think the stock is a sell, at least from an EW point of view, primarily because the fifth wave is, one way or another, a diagonal. This should result in a fast retracement back to the baseline which , in and of itself would constitute a drop of about 28%. Both RSI and MACD are very much in overbought territory and the stock is trading at around a P/E of 73X.

The company already is making more on the sale of accessories, a sign of maturity, and is becoming more vulnerable to competitors that may challenge the virtual monopoly it enjoys in this field of robotics. There are plenty potential competitors, Medtronic, J&J, Philips Medical Systems or Siemens just to name a few.