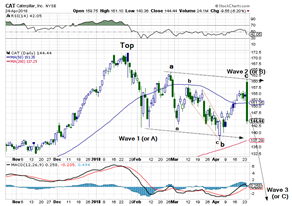 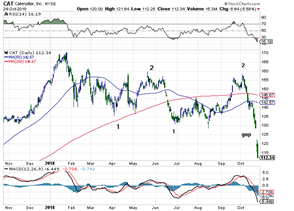 There are a few minor modifications from the April prediction. Essentially, as always, it took longer than expected but from the level then in April of about $160, the stock is down by almost $50 which is almost 30%. What is more, we just had a gap which often marks the middle of a third wave. We would be careful not to bet the farm on that as the RSI seems to suggest that we are, at least temporarily, starting to get oversold.

Critical points are around $97 and then $87 or so. The first number is where any pretense of a revival must be abandoned due to overlap. The second is the bottom of the last, extended up wave.