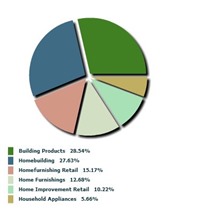 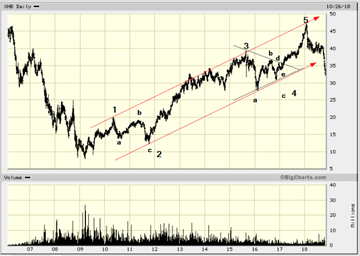 The boys from Gainesville reminded me of the existence of this index. Even so this index has been on my mind for the last year or two as I tried to sell and buy a property. Particularly here in Canada things seemed to have gone a little crazy lately but that still does not guarantee that you are experiencing a top.

In any event what we have here is a 5-wave move down from 2006 to early 2009, the low of the financial crises – probable a wave C of a large ABC correction wave 4, followed by a 5-wave fifth wave into a new high at the start of 2018. This index, by the way, does not only contain the homebuilders proper but also all the other elements that play a part in the joy of moving. Building products, furnishings, appliances and so on are all ingredients of this index. What you will notice almost immediately is that this thing double-topped at about $47, always a good time to step aside and smell the roses. All the more so if this top occurs as a thrust from a triangle, which, arguable, is the case here. This is so because invariable you will return to the lowest point in the triangle immediately after the thrust is complete, here at about $27 or so.

Ultimately a fifth wave retraces itself entirely as it moves back to the 4th wave of previous degree at around $7 or so. This assumption could, of course, be wrong if we are in a brand new bull market. In that scenario the up move from the 2009 low would have to be an initial first wave. These typically retrace a lot more than the 30%, give or take, that this index has done this year. It is a possibility that, for the moment at least, does not seem realistic. However if the Fed. and other CBs fail to raise rates we could be in an environment where hyperinflation could undermine all financial assets and boost all real assets. Time will tell.