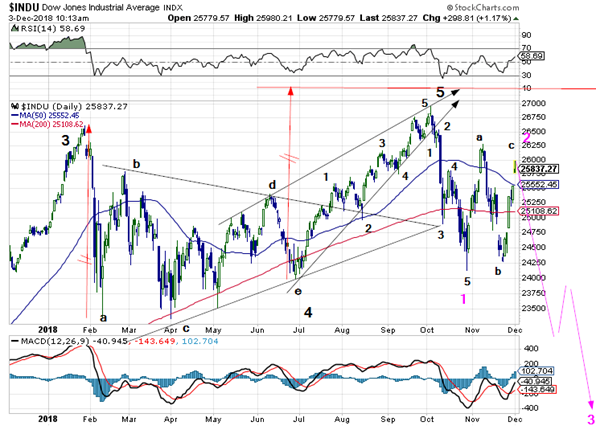 The great decline is imminent, right around the corner and has been predicted to happen at least ten or more times over the past 10 years by one of the leading EW purveyors. Clearly counting to 3 or 5 is not as simple as they would like you to believe. Impatience may be getting in the way of sound analysis.

Earlier it was clear that Nasdaq had gone through a corrective drop early this year. It stood out like a sore thumb. Here again we have a 2000 point drop mid November. This is a 3 wave affair that does not make a new low. It is definitely not 5 waves and therefore should be seen as a b-wave of sorts. Here probable a wave b within wave 2 counting from the top. It is even possible to argue that this whole year is nothing more than an ascending flat correction but that is unlikely seeing that wave a also does not look like 5 waves. Accordingly for now we go with the top in October followed by waves 1 and 2 – the start of a major decline – in which 2 may not be entirely complete but at least very close to it. Wave 3 in this analysis is actually right around the corner. If so it could easily measure at least 5000 points and may coincide with the Trump house of cards falling apart spectacularly.

At least as far as the Dow goes we have basically made no progress, either up or down, for most of this year. This in a remarkable contrast to the enormous increases in the previous years all the more so as such timid behaviour is at odds with all the geopolitical events etc. We will shut down for a few months, getting tired of waiting for Godot as a friend puts it.