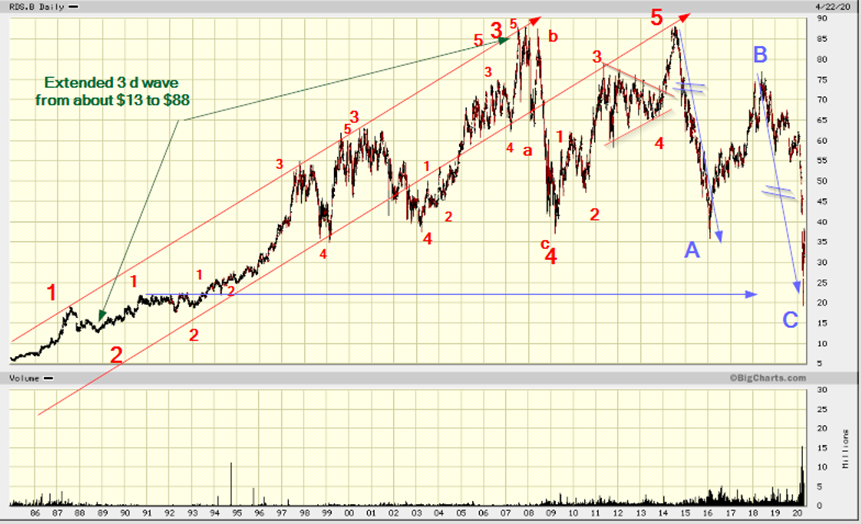 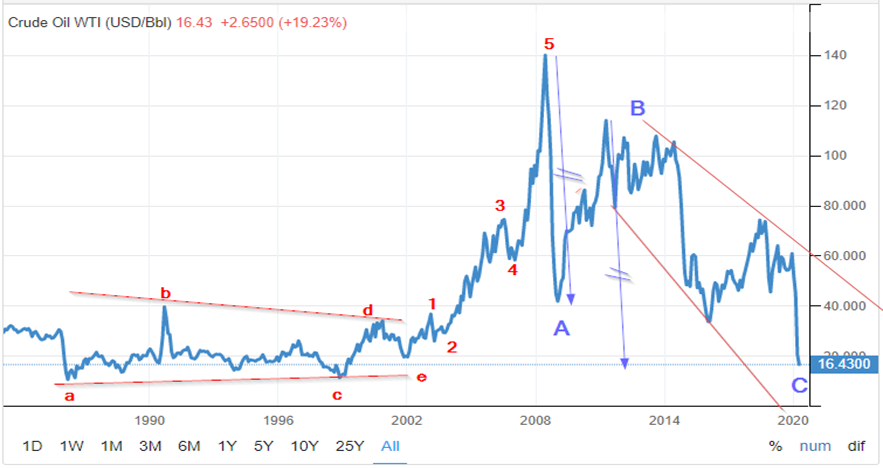 The bottom chart of WTI crude is from Trading Economics. It has a rather low resolution and consequently the highs and lows are not correct. Furthermore the whole chart is stretched a little bit in order to harmonize the time axis with the Bigchart  of Royal Dutch above it. What stands out immediately despite a reasonable level of correlation between the stock and the “stuff”, is that the stock has two peaks, the second one being the highest by a very slight fraction of a dollar whereas the oil peaks just once (at $144) and does not even get close the second time. Partly this may be due to the fact that commodities typically extend their 5th waves, not their 3d as is more normal for stocks. Also the 2009 stock crash was the result of a loss of integrity within the financial system itself which seemed to have been quickly remedied by the TARP programme. Whatever the differences in the dynamics of the two charts the end result is roughly the same.

It appears that both the stuff and the stock may have hit bottom. On oil the e-wave within the multi-year triangle has a low around $10. That LEVEL was reached on the JUNE futures contract the other day and then some.  $10 is not a sustainable level for oil. At that level 3/4 of US production would be uneconomical and all of the offshore activities and this is not likely to happen. Ergo Royal Dutch may have seen its lows already. That does not mean that it will trade back to the recent low of $19 but it might be worth looking at the buy side if the stocks trades into the gap at <$30. Keep in mind that the RDS.B chart is of the ADR, so there are 2 shares in each ADR. The yield is >11%

By the way, we had RDS.B as a buy with a minimum target of $56 5 years ago asper the analysis below;